Prof. Rob van Tulder of the Partnership Resource Center at the Rotterdam School of Management asked this question during the typically questions and answer session following my presentation at the Cross-Sector Social Interactions conference at the Copenhagen Business School. It’s a loaded question, with proponents of collective impact publishing reports like this one (http://sparkpolicy.com/collective-impact-impact-cross-site-study-25-collective-impact-initiatives/) and articles in Stanford Social innovation Review (https://ssir.org/articles/entry/collective_impact) and detractors publishing critiques in Nonprofit Quarterly (https://nonprofitquarterly.org/2016/04/28/voices-from-the-field-10-places-where-collective-impact-gets-it-wrong/). The Network for Nonprofit and Social Impact is in the middle of a large-scale national evaluation of the model, comparing it to a control group rather than just taking the “successful cases” and reporting on those. 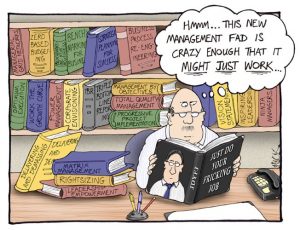 What prompted that question? It was the findings from a new NNSI study on the diffusion of the collective impact model across the United States, led by NNSI doctoral student Anne-Marie Singh. The research examines what predicts the presence of a collective impact network for education reform in U.S. Counties (N = 1775).

In short, the adoption of collective impact is most likely when resources are plentiful and neighboring communities are doing it, which sounds like the diffusion of a management fad. So, the question was exactly on point. The model of social impact seems to be diffusing across the United States like a management innovation. But, in my opinion, what would make it a fad is based on whether or not it produces results that communities can identify wouldn’t have happened any other way. If it does, then the investment in collective impact might be viewed as a profitable one and communities will continue to invest, should they have sufficient resources to do so. But, if it doesn’t produce those “undeniable results,” then fad might be exactly the right word used to describe it.