Conversations around social issues are regularly punctuated with the term “systems change.” Systems change recognizes that problems are unconstrained, dynamic, and continually evolving. Education disparities, climate change, public health, women’s rights, and poverty are entwined; Addressing any one of these issues unravels moving parts in the other.

The Rockefeller Foundation states that systems change requires collaboration. Individuals and organizations, from across sectors and areas of expertise, collaborate to combine resources and interests to address a system. These networks are the focus of the research that we do at the Network for Nonprofit and Social Impact.

Plenty has been written about systems change by think tanks and foundations, with an increasing focus on translating this seemingly nebulous concept into a tangible one. One popular example is Donella Meadows’ bathtub analogy to describe “leverage points” or points of power where one can intervene in a system. She lists 12 leverage points in increasing order of effectiveness. These are:

11. The sizes of buffers and other stabilizing stocks, relative to their flows.

10. The structure of material stocks and flows (such as transport networks, population age structures).

9. The lengths of delays, relative to the rate of system change.

8. The strength of negative feedback loops, corresponding to the impacts they are trying to correct.

6. The structure of information flows (who does and does not have access to information).

5. The rules of the system (such as incentives, punishments, constraints).

4. The power to add, change, evolve, or self-organize system structure.

3. The goals of the system.

2. The mindset or paradigm out of which the system — its goals, structure, rules, delays, parameters — arises.

1. The power to transcend paradigms.[1]

We view this list as having two parts. Leverage points 12-6 focus on the ‘nuts and bolts’ of a system with emphases on input and output flows, binding parameters, and structural attributes—the stuff of numbers. The remaining five interventions are more of a ‘mindset shift’— recalibrating and zooming out to examine the system as a whole. Its very soul.

One way to understand the collaborative networks focusing on system change is to consider the levers of systems change that they use. The vertical axis focuses on the degree networks utilize the nuts and bolts (12-6) leverage points, and the horizontal axis focuses on whether they focus on the mindset shift (5-1) leverage points. Creating this chart helped us think about the relationships between network structures and network action.

Throughout Donella Meadows’s piece, she beautifully uses a metaphor of a bathtub to illustrate the leverage points. Inspired by her article, we first describe the network type. Then we give an illustration using a washing machine as a metaphor for a network. 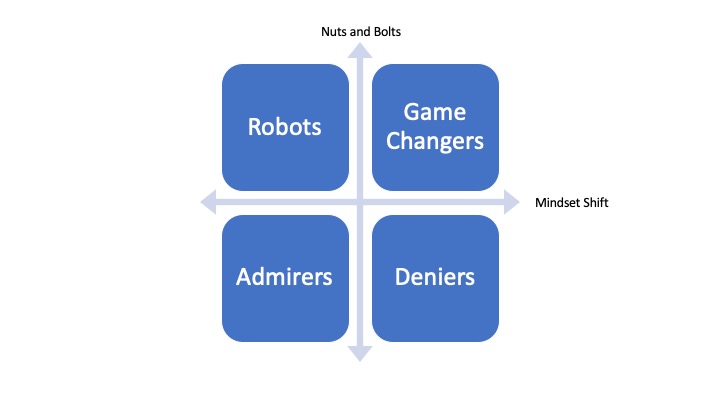 The robots: These networks focus exclusively on systems alignment, learning, and data, but do not use any mind shift levers. Using our washing machine metaphor, robots would be a well-oiled state of the art washing machine with 59 functions all working at capacity. But the network manager only knows how to operate two buttons on the dial and won’t tell anyone where he hid the manual cause he’s afraid of losing control.

The game-changers: A network advanced in both structure and action will document itself with metrics, build the capacity of its stakeholders to jointly achieve outcomes, co-create and co-implement plans with their community, create succession plans for leadership, identify gaps for strategic intervention, and grow trust. Returning to the washing machine metaphor, game-changers represent an advanced piece of technology with washing and drying functions that is energy and water-efficient. The network is already 3-D printing prototypes with refined features modified for scale and scope, without compromising on budget.

The deniers: While there is nothing wrong with thinking big and creating ambitious goals, a network who does so without refining systems for information and communication flows among stakeholders, creating baseline data to document growth, and securing funding for planning and implementation, might find itself struggling to achieve those ideals. Denier washing machines would be semi-automatic and have design and mechanical flaws. The network wants the machine to wash, dry, and conserve water and energy, but refuses to pay for a handyman.

The admirers: A network in this quadrant might have come together inspired by the idea of forming a network, but without determining whether the problem area or the community is best served by one. Hence, the exercise in putting together the network would be met with a lack of a clear vision, lack of support from the community and stakeholders, and internal rivalry and distrust among organizations feeling threatened by the network. Admirers would be flawed, leaky semi-automatic washing machines. It costs too much to repair and is impossible to replace due to high import taxes associated with a new one. The network is overwhelmed and decides it’s time to ask each organization to wash one garment at a time.

What do you think about leverage points? And how would you classify them? Please write and tell us about your network and your understanding of systems change.